US Naval honour for Tim Taylor

Two years ago we teamed up with renowned underwater explorer, Tim Taylor, to create 3D archaeological models of a lost US WWII submarine that his team had discovered off the coast of Alaska.

The USS Grunion was returning to a naval operating base there, when she disappeared without a trace, and was assumed lost with all hands on October 5th 1942. Tim’s team at Ocean Outreach Inc located and filmed the site as part of their ‘Lost 52 Project’, seeking to give some closure to the families of the lost servicemen and women.

We supported them by processing and developing technical-grade 3D data-sets of the USS Grunion’s bow for use in virtual and augmented reality outreach, educational programs and applications.

Tim was recently honoured with the US Navy’s highest civilian award – the Navy Distinguished Public Service Award. His team is credited with having discovered the final resting places of 288 men, all locked inside what had become sunken tombs.

“Every one of these lost submarines, along with our other ships, to the U.S. Navy is a hallowed site,” said Sam Cox, a retired rear admiral who is director of Naval History and Heritage Command.

We at Viewport3 would like to send our congratulations to Tim on this well-deserved honour. We are proud to have played a role in commemorating the sacrifice of these sailors, and offering some measure of comfort to their families. 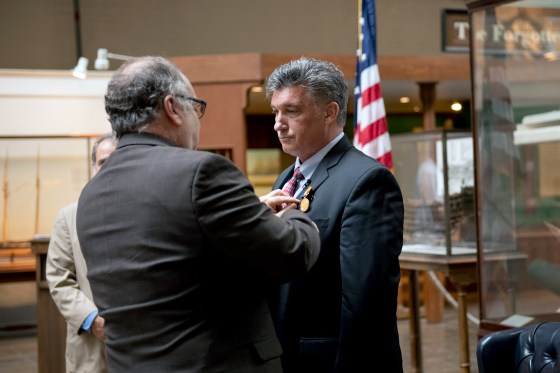 You can read more about our work on this project at: https://viewport3.com/north-east-firm-joins-forces-with-renowned-explorer-to-create-3d-archaeological-models-of-newly-discovered-us-wwii-submarine/